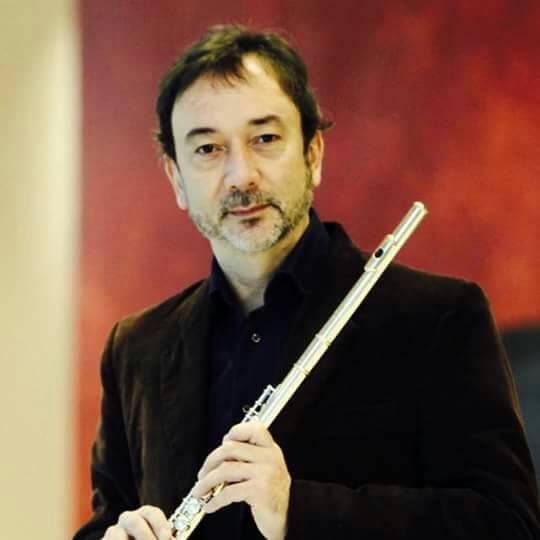 Horacio Parravicini was born on November 11, 1960 in Buenos Aires, Argentina in the Italian family, dedicated to film, photography and biochemistry.

He studied at the Edmondo d’Amicis School, where he got captivated by the literature of Petrarca, Dante and Manzoni. The contact with these authors will have an important influence later on his vision of art in general and music in particular.

He begins learning the flute under the supervision of the Italian flutist Alfredo Montanaro at the Carlos López Buchardo National Conservatory, where among his teachers were Oscar Piluso (Flute), Fermina Casanova (Harmony) and Juan Pedro Franze (History of Music). He will graduate from the Conservatory in 1980 with the Honor Medal.

His interest in contemporary music during the first stage of his career led him to collaborate assiduously with the New Music Concert Society of Buenos Aires, recording and premiering works by American composers, and participating as a soloist at the Alicante and Musikaste Festivals in Spain.

In 1986 he moved to Europe to study with Glauco Cambursano at the Giuseppe Verdi Conservatory in Milan. A year later he settles in Berlin, where his teacher, mentor and guide will be the flautist Andreas Blau, Soloist of the Berlin Philharmonic. At the same time, he participated in several advanced courses in France and England with Maxence Larrieu, Alain Marion and William Bennet, the latter becoming a special promoter of his artistic career, and with whom he will later participate in numerous recitals

Since 1987 until today Horacio Parravicini occupies the position of Soloist Flute in the Symphony Orchestra of Bilbao, Spain with which he has participated on numerous occasions as a soloist with the concerts of Ibert, Reinecke, Bach, etc.

His activity outside the orchestral scope includes chamber music (he is a frequent contributor to the Chamber Music Season of the B.O.S, especially with the Quinteto de Vientos B.O.S); the recitals and his CDs as a soloist, dedicated mainly to French and Eastern European music; and his dedication to teaching as a teacher in Master Courses at the Superior National Conservatory of Argentina and in the city of Lodz, Poland.

He has been invited to festivals in Spain, Portugal, France, Italy, Argentina, Chile, Mexico and the United States. For six years he has been a professor at Musikene, the Basque Country’s highest music institute. He regularly gives flute masterclasses worldwide.

Horacio is also devoted to Baroque music and plays the traverso as well.

In 2017 Horacio Parravicini became Haynes Artist,  one of only two Artists in Spain of this legendary brand, which is famous for its 125 years of history in flute making and the highest level of craftsmanship.

Horacio Parravicini is a member of the Flute Society of the Order of the Knights of Traverso (Caballeros del Traverso), which is the society of the most distinguished Spanish flute players.

The flute is not the only passion of Horacio: since before the start of his musical career until today, photography takes an important and significant space in his life.